Searching for Son of the Man. Tandis Art biweekly

Searching for the Son of Man

A review of Amir Hossein Akhavan’s paintings at Etemad Gallery

At first glance Amir Hossein Akhavan’s paintings may strike the viewer as imitative and western. In some ways the label “western” is applicable to his work because he was raised in Boston, where he developed his visual culture and principles. In terms of structure, the “Son of Man” series is primarily a technical review of different methodologies from throughout art history. In Akhavan’s portraits – each of which seem to have stopped at a particular moment – one can find traces of Kossoff’s neo-expressionism, Baselitz’s early figurative work, as well as Porter’s spirit of neo-fauvism. It is as if the artist’s attempts at reaching the particular face he has in mind, and the process of creating a work of art, have been put on display here. On each canvas the artist experiments with different methods and hues, and his boldness in exhibiting these experiences gives the series a unique quality. His approach to portraiture and the quality of brushstrokes that give classical portraiture a contemporary expression, provide the work with a certain painterly creativity (in terms of the artist’s understanding of media and technique), which speak to his experience and skill in coming together with his media and material. The form of experimentation with colors moves the work away from mimicry and ornamentation, because the artist’s visual strategies are applied so quickly, consciously, and boldly on the canvas that it does not allow the work to become decorative. This type of visual awareness can be found in the work of contemporary artists like Cecily Brown, and the modernization of classical portraiture is also present in the works of Glenn Brown. In terms of content one feels like the artist has had many attempts at depicting the “Son of Man”; Promethean attempts that do not diminish the importance of the hero. The walls of Etemad Gallery and the canvases hanging from them are like pages of a sketchbook where the artist performs experiments with colors based on Renaissance foundations, and his boldness at displaying this work leads to a new form of expression. In Iran’s art scene, where artistic experience and depth are constantly being replaced by sentimentalism, lumpenism, and pseudo-intellectualism, this type of presentation seems essential and necessary. Unlike many young technicians throughout Iran that in one way or another can be considered followers of Jenny Saville (and whose numbers compete with the number of paint tubes used by Lucien Freud!) Akhavan’s use of color is technically mature and does not turn into a senseless application of paint.

In the midst of all this, the worn titles of the pieces in the series (devil, son of man, etc.) are a bit lame. Perhaps we should recognize the artist of this exhibition as merely a painter. The pieces in “The Son of Man” easily carry the title of the series, but the weightlessness of the titles lacks novelty and does not match the epic glory of their layers of paint. In other words, when the title of a piece of art, be it epic, pop, etc., becomes cliché, it harms the work regardless of how structurally strong it is. In any case, in terms of technique and presentation Akhavan has brought something new (at least to Tehran), which shouldn’t be ignored, even if the content of the work is not entirely in balance with his strong technique. 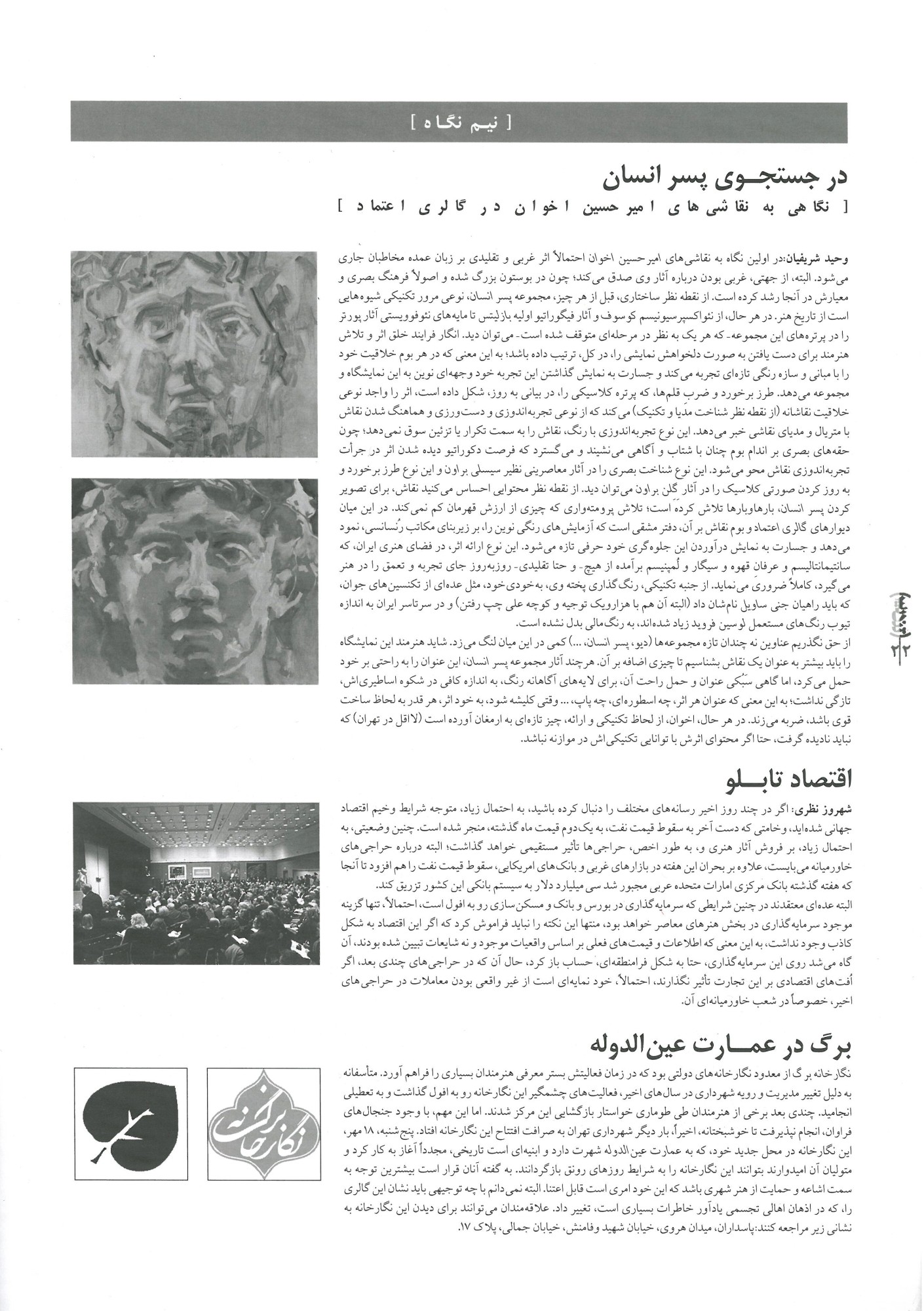